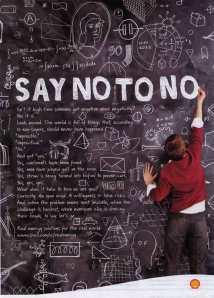 If you’ve ever had someone doubt you or your will to get something done, you know how deflating that can be.

Throughout my lifetime, I’ve had a lot of people question things that I’ve wanted to do… and even had some people try to talk me out of things because… “there’s no way you would ever be able to do that.” And every once in a while, I would talk to authority figures who would advise me to “set [my] sights a little lower.”

One example… when I was a reporter in Tennessee, I wanted to get to Washington state to be with my then-fiance. He was in Seattle, which– at the time— was the 13th largest TV market in the country.

Well, the place I was coming from— Knoxville— was ranked 65th. That was quite a jump, especially for someone who had only been reporting for about a year. So I applied for a reporting position in a much “safer” sized market: Spokane. Spokane was actually about #80 or so… so I would be heading in the “wrong” direction in terms of market size— but I knew my chances of getting a job there were much better than finding one in Seattle. And there was the added benefit of it being a lot closer to Seattle than Knoxville.

So. I sent my resume and my tape to TV stations in Spokane. I didn’t hear back at all from two of them. The third one sent my tape back with a letter saying, “You are not really ready for this sized market.” Mind you, they KNEW I was already in Knoxville— not sure if they realized it was a bigger market than Spokane— but whatever.

Anyway….. less than a year later, I was reporting at the ABC affiliate in Seattle. And had to smile a bit when I once did a live satellite shot for the station that had snubbed me in #80 Spokane— while I was working in market #13. I’m sure they didn’t remember me, but still— it felt pretty good.

It’s important to mention that I wasn’t originally hired by the Seattle station to report. They needed writers, so I sent in my resume and they hired me for a writing position. About three months into the job, they lost two reporters and were a bit desperate— so desperate that they turned to me and said, “don’t you have some reporting experience?” (I’m not too proud to admit that I really WASN’T ready for a top-20 market at that point, but I worked at it and got better as time went on).

Regarding harsh criticism: it’s taken me a while to get to this point, but eventually I realized that naysayers actually make me work twice as hard to get things that I want— in large part because I want to prove them wrong. 😉

So I am being completely serious when I say THANK YOU to all of the naysayers in my life. You all helped to light a fire under my rear.